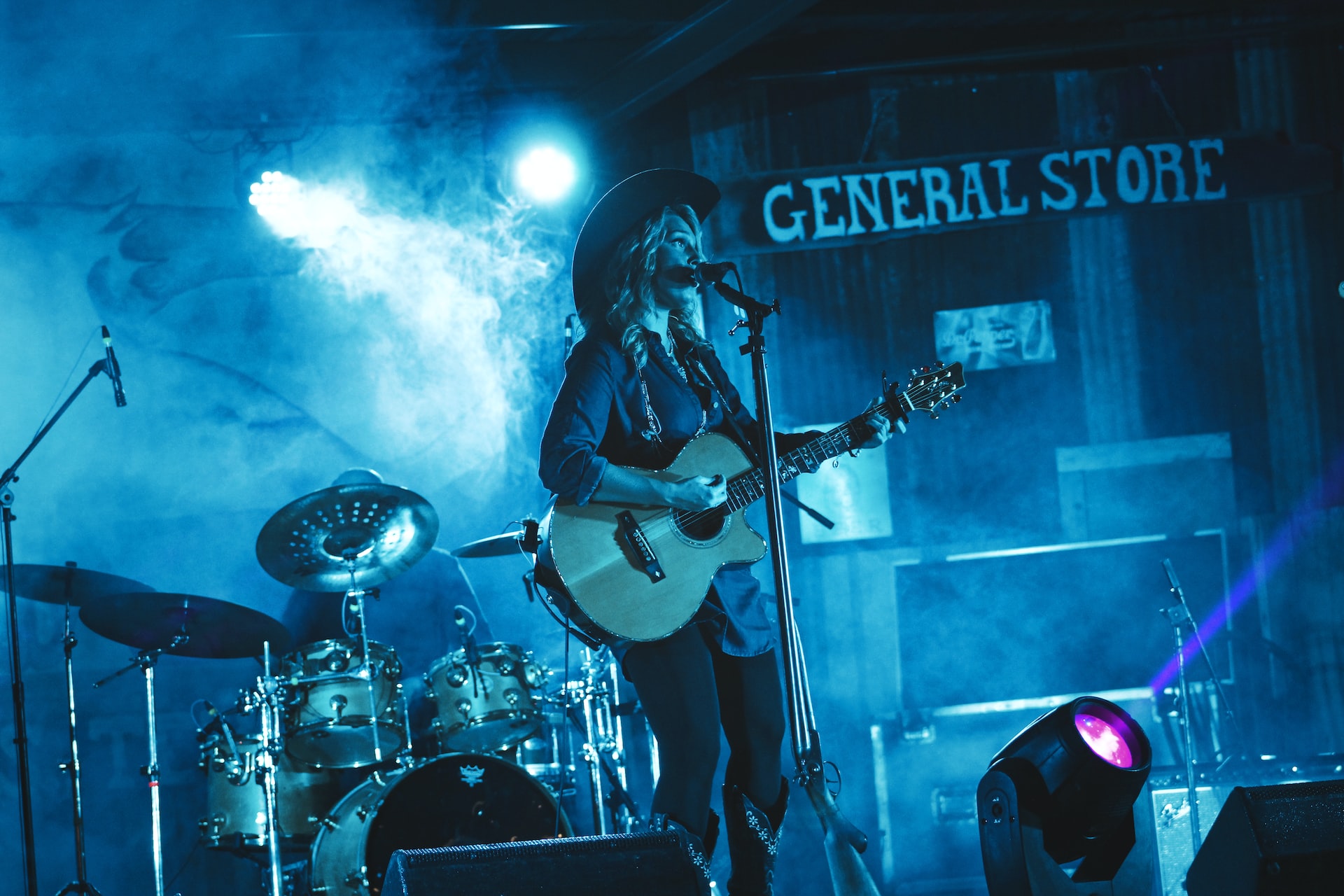 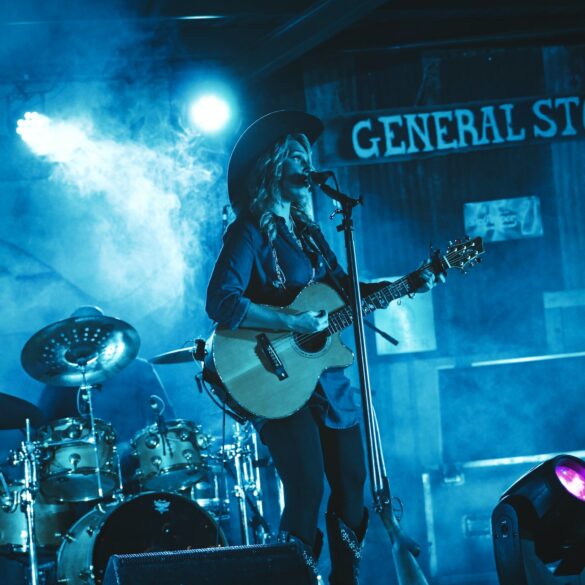 When it comes to country music, you might think of Johnny Cash, Garth Brooks, and Keith Urban.

But did you know that there are many country songs that are sung by amazing women that are timeless today?

In this article, we have rounded up some country songs that are sung by women for women that will surely resonate with you.

From Taylor Swift to Dolly Parton, take your pick and let your inner cowgirl out!

“You Belong with Me” – Taylor Swift

Taylor Swift is arguably one of the most well-known country-pop singers of the modern era.

“You Belong with Me” was featured in her 2009 album Fearless and revolves around a girl who’s trying to persuade a guy in a toxic relationship to be with her instead.

With its iconic guitar-backed intro, catchy rhythm, and sweet vocals, it’s criminal not to sing or dance along to this song.

This track is an all-around fun and upbeat song that’ll surely make your crowd go wild.

Released in 1984, “Why Not Me” is a country song about a woman who yearns for the man she likes to notice her feelings for him.

This track is the duo’s second number one hit and remained on the country music chart for fifteen weeks. The song doesn’t just have a simple melody and heartwarming lyrics, it’s also pretty easy to adapt to any vocal range.

If you’re looking for a catchy and feisty country-rock track, Shania’s 1999 smash hit will make everyone go crazy.

With its irresistible hook and energetic rhythm, this track is an anthem of empowerment for women and girls everywhere.

The fast-paced melody gives the song an upbeat vibe that it feels criminal not to dance along to it.

Released in 2010 by the duo Sugarland, this track is about two lovers who are “stuck like glue” with each other.

The song itself is sweet and cute, but the music video puts a different spin on the lyrics by having the singer stalk the guy she likes and comically ends up in prison.

“I Fall to Pieces” – Patsy Cline

This 1961 track has an interesting origin story as it went from being an unknown song to becoming one of Patsy’s biggest hits.

Initially, Patsy was reluctant to record this song until her producer gave her enough encouragement.

Even after its release, it was literally ignored by most radio stations before it was promoted through a road man hired by Hal Smith from the Pamper Music label.

With a slow-paced melody and Patsy’s smooth vocals, this song truly captures the feeling of being heartbroken and will undeniably move your audience.

Originally recorded by Bobbie Gentry in 1969, Reba puts a gothic-style twist on this southern hit in her 1991 cover.

Lyrically, the song is about a woman named Fancy who works as a sex worker to escape her impoverished life and gain financial independence.

With its catchy, guitar-backed rhythm and introspective lyrics, this song is easily relatable and resonates with the struggles of trying to earn a living, which we all experience.

“Ready to Run” – The Chicks

We can all relate to the fear of commitment and responsibilities.

This 1999 single is all about a woman who’s ready to run away from her wedding as she doesn’t feel she’s prepared to fall in love yet.

The song has won at least one Grammy and was even featured in the film Runaway Bride.

It’s an upbeat song with a cheery tune and repetitive lyrics, making it a pretty easy track to follow.

Released in 2007, “Country Girl” talks about how you don’t need certain features to appreciate the country way of life and music.

With a lighthearted tune and Rissi’s clear vocals, this song inspires you to embrace your inner cowgirl without caring about what others say.

This 1973 song isn’t just iconic, but it’s also a staple at almost every karaoke party out there especially if you’re a country music fan.

“Jolene” became an international success after its release and is Dolly’s most-covered song.

The track is so recognizable and irresistible that you won’t have a problem getting everyone to sing along with you.

Taking inspiration from the children’s fairy tale The Wizard of Oz, this moving 2017 single is about the singer wishing to trade her broken heart for the Tin Man’s metallic body so she wouldn’t feel any more sadness.

With its slow-paced melody and poignant lyrics, this heartbroken ballad makes a good choice if you’re not a showy singer.

Originally recorded by the band Sons of the Desert, this upbeat track became well-known after the Dixie Chicks covered it in 2000.

Despite its lighthearted tune, it tells the story of two best friends, Mary Ann and Wanda, who murder Wanda’s abusive husband.

The song caused controversies for its violent themes, but it also created public awareness of domestic violence and eventually became one of Dixie Chicks’s most popular tracks.

This 1977 country ballad was a worldwide hit after its release and has been covered by various artists like Dolly Parton, Anita Meyer, and Lorrae Desmond.

The song is about a heartbroken girl who had taken her partner for granted and realizes it’s too late until she loses him.

With a relaxing piano-backed tune and simple lyrics, this jazz-infused track is perfect if you’re looking for something chill.

No matter what your opinion of country music is, you can’t deny that this 2009 track hits hard in the feels.

With themes of loneliness and longing for companionship, “Need You Now” became an international success and was even covered by several popular artists like Adele and Cheryl.

The sweeping melody, relatable lyrics, and dramatic vocals make it a good choice to showcase your singing skills or get deep into your feelings.

No one can deny that this 2009 smash hit slaps and is a big part of most ’90s kids’ childhoods.

Featured in Hannah Montana: The Movie, this ballad is about overcoming the struggles of life to a rewarding end.

The song is considered a modern classic and was even nominated for the Grammy Awards.

“The Climb” is definitely a vocally-demanding song, but hitting that final note makes it a satisfying journey.

First recorded by Zaca Creek in 1992, Faith Hill released her cover of the song in her 1993 album Take Me As I Am. With an energetic melody, “Wild One” is for the rebels and free spirits who refuse to be tamed. It’s an empowering anthem that encourages women and girls to truly embrace themselves despite societal norms and expectations.

“These Boots Are Made for Walkin'” – Nancy Sinatra

Released in 1965, this catchy folk rock single is about a girl who refuses to be pushed around by her no-good boyfriend and threatens to “walk him over” with her boots if he doesn’t change for the better.

The song became a smash hit and has even been covered in different genres, like industrial and metal, over the years.

With a lighthearted tune and slow-paced rhythm, you’ll have everyone laughing and singing with you over how comedic yet serious the lyrics are.

The song talks about how some people will see themselves as superior to others and refuse to humble themselves.

With a cheerful beat, energetic synths, and sassy lyrics, this is a good choice if you got something to get off your chest and wanna say it out loud for everyone to hear.

The song does go quite high at some parts, but you can easily adapt it to your own range.

In this powerful 2018 country-pop single, Kelsa unapologetically sings about getting out of an abusive relationship and making up to herself for neglecting her needs.

Featuring a slick rhythm and catchy chorus, “Miss Me More” is a fierce girl-power anthem about reclaiming your identity.

Taking inspiration from the old tale of Romeo and Juliet, this 2008 smash hit was probably what introduced most of us to T-Swift.

The song was written when Taylor was experiencing a difficult time with a guy she hadn’t been officially dating yet, and he’s been rumored to either be singer Joe Jonas or frontman Martin Johnson.

The dramatic melody and dreamy vocals give the song a fairytale-like vibe, making you feel like Juliet waiting for her Romeo to come to rescue her.

It does have a few key changes, so you might want to do some warm-ups so you can belt out that chorus as majestically as you want. 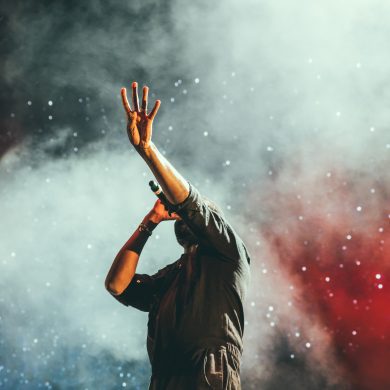