Karaoke is such a universal activity that everyone can do and enjoy with their loved ones. No song is off limits in karaoke, even when it’s in another language.

It’s undeniable that Hindi songs are just as fun, upbeat, and melodious as English tracks are.

That’s why we’ll be taking a look at the 21 best Hindi karaoke songs and their notable qualities.

Whether you’re a fan of Hindi songs or looking for new tunes to sing at your karaoke bar, you’re definitely find something you like in this article.

Kishore Kumar is one of the greatest singers in the history of Indian music and is responsible for creating many classic Hindi hits.

This timeless track was actually featured in the 1979 Bollywood film Manzil.

The lilting melody and Kumar’s soothing vocals give it a nostalgic feel that can be appreciated by everyone of all ages.

This romantic ballad finds two lovers singing about their love and asking each other to remain faithful to their relationship.

The song is from the soundtrack of the 1990 Indian film Jurm. It’s a loose remake of the old English track “500 Miles.”

With sweet harmonies and heartfelt lyrics, it’s a perfect song choice for couples.

The song was first released in the 1977 musical film Hum Kisise Kum Naheen.

This breakup single explores how greed for money leads to betrayal and heartache between two lovers.

The lyrics might be simple, but it’s a heartwarming track that everyone can croon to.

Mohammed Rafi was a well-known singer in the Indian subcontinent for his versatile vocal range.

His larger-than-life vocals turned this romantic ballad into a masterpiece, and it remains an unforgettable classic.

Composed for the 1980 movie Karz, this song is one of the hits that were notable for setting the trend of featuring disco music in Indian films.

This 1964 ballad took off in popularity after being featured in the thriller film Woh Kaun Thi?

Many people remember Mangeshkar by this song as it’s one of her most iconic tunes.

It’s a song of separation between a couple, but it can also be interpreted as a track about death. Sometimes this ballad is sung at Indian funerals.

This song is another memorable track from the renowned Kishore Kumar.

Featured in the 1971 film Buddha Mil Gaya, the track finds Kumar singing about falling in love with a beautiful girl.

The sweet melody and intricate lyrics make it a great song to dedicate to someone special.

“Kahin Door Jab” is a tragic ballad that was composed for the 1971 cult classic film Anand.

The song revolves around the protagonist Anand, who is sick and wonders if he can be with the girl he loves.

It’s a simple and slow-paced track that perfectly captures the feelings of helplessness, heartache, and sadness.

A more recent release, this pop-infused track was published on YouTube in 2015. It became a hit, generating over 300 million views on the site.

With a melancholic rhythm, the song is about a man who wishes his love interest to always remember him as he has to leave her.

Translated as “Come to me now, my love,” this upbeat song was first published in the 1971 film Caravan.

It has cemented itself as a culturally-significant, cabaret-style number that has been remade and remixed over the years.

The song is fast-paced with sensual undertones that are fun to dance along with your loved ones.

This catchy track became a superhit after it was featured in the 1969 Bollywood movie Aradhana.

Translated as “the queen of my dreams,” it finds the protagonist hitting on his love interest as he chases after her on a jeep.

With straightforward lyrics, It’s a pretty easy track that you can dedicate in a fun way to your crush.

This song takes a comedic turn as it finds the main character boasting about his thieving skills and taunting his rival.

It was released in the 1981 film Kaalia, which starred Amitabh Bachchan in the title role.

This track was released in the 1981 film Yaarana and is still a fan-favorite today.

With a tender rhythm, the song is about first love and the desire to be with the person you adore.

It’s a great sentimental tune that is certain to the hearts of anyone who hears it.

This upbeat 1969 song is a classic dance hit that became well-known after being featured in the Hindi film Prince.

Featuring Rafi’s sleek vocals, it’s a great track that would get anyone into the mood of dancing.

It has been covered and remixed over the years, so you have many variations to choose from.

Taking a step back from the dance tunes and love ballads, this song is about the beauty of nature.

It’s considered one of Mukesh’s most well-known tracks and is often played at dandiya (a sort of religious dance) functions.

With relaxing instrumentals and haunting vocals, it’s pretty easy to remember and sing to.

“Dheere Dheere” – Yo Yo Honey Singh

The original version of “Dheere Dheere” comes from the 1990 blockbuster film Aashiqui.

Singh incorporates his cover with pop and hip-hop elements that turn it into a catchy tune.

The simple beats and straightforward lyrics make it a great love ballad you can belt out on karaoke night.

This track originally came from an Urdu poem by Sahir Ludhianvi that was modified to be more lyrical and sentimental.

Featured in the 1976 titular film, it’s basically a back-and-forth between a couple expressing their feelings for each other.

The song has won its music director and lyricist Filmfare awards and is considered one of their best creations.

If you’re looking for a sweet song to sing with your partner, “Chaar Kadam” is perfect for you.

This track draws inspiration from European music, like Tchaikovsky. The lyrics are based on an Indian poem by Swanand Kirkire.

It’s a breezy love song that sets the right tone for couple duets.

Another hit from Kishore Kumar, this catchy song is about a man who desires to be more cautious when falling in love.

The Hindi number was published in the 1967 spy heist film, Jewel Thief, which was a box-office success in India.

You might be familiar with the Pussycat Doll’s cover of the song, but it was initially sung in Hindi for the 2008 film Slumdog Billionaire.

“Jai Ho” was extremely popular upon its release, spawning tons of covers and remixes.

We can’t blame them though. This song is catchy and energetic, making it hard not to dance to.

Released in 2013, “Nagada Sang Dhol” is a Gujarati-flavored song that incorporates the traditional Garba dance in its choreography.

The track features an upbeat melody and introspective lyrics that lend it a special charm.

There’s nothing sweeter than a song that revolves around the theme of friendship.

Kakkar’s tender track is about a group of friends who are with each other through thick and thin.

With a fun melody and amazing message, it’s a great song to sing with your pals. 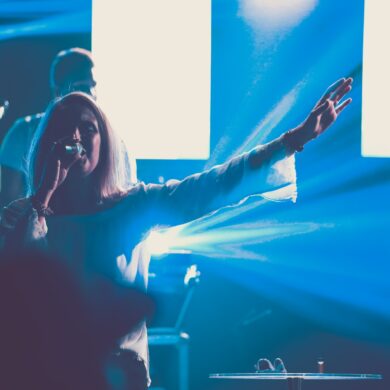