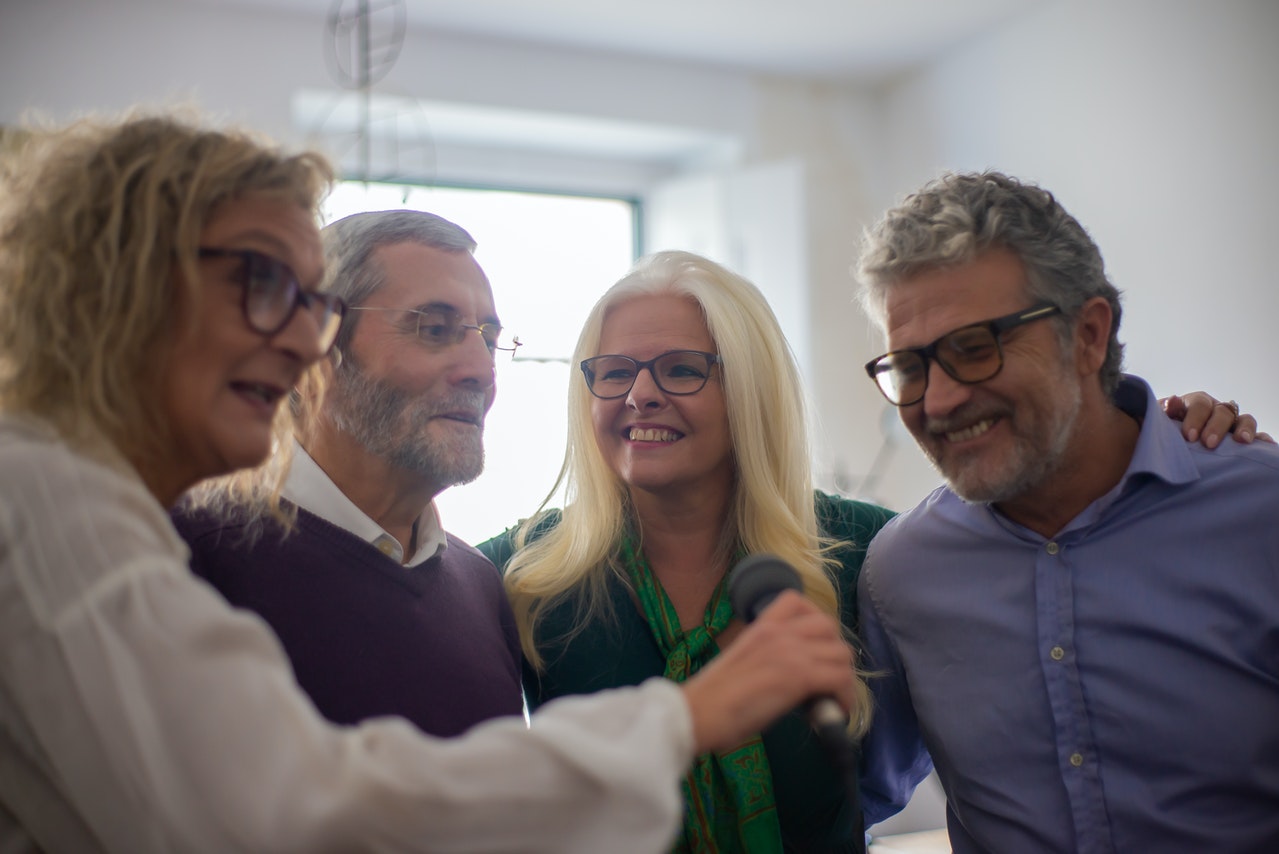 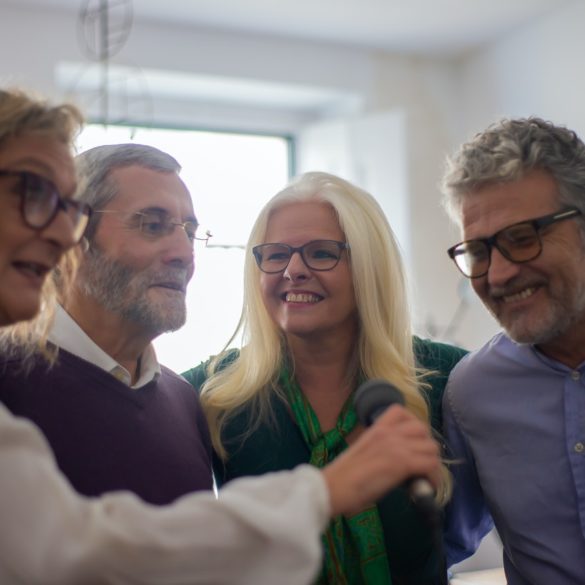 The number one rule of karaoke is that it’s for everyone, regardless of their age. Whether you’re a kid in middle school or a mom with five kids, karaoke gives you the chance to shine in the spotlight.

And as the rule goes, even older adults can have fun in karaoke too.

Karaoke doesn’t always have to be lively and energetic. For seniors, karaoke can be about enjoying the songs of the past and reminiscing about the good times.

In this article, we’ve come up with a list of classic songs that we’re sure seniors can enjoy and sing along to.

“Come Together” – The Beatles

You don’t have to be a senior to enjoy this swanky rock song. “Come Together” was written by John Lennon for the Beatles’ album Abbey Road in 1969. It was such a hit that it peaked on the music charts in America and has been covered by many popular artists.

With its catchy beat and simple lyrics, this song can be a good opportunity for you to channel your inner Paul McCartney.

Released in 1957, “Folsom Prison Blues” is one of Johnny’s peppier songs despite its somber message describing life in prison. According to Johnny, he’d never actually done time, and the song was inspired by a movie he saw.

This song is on our list because it has pretty funny lyrics and because of the upbeat melody of the guitar that’ll make you want to do a little jig to the tune. You can even emulate Johnny’s gruff voice to really sell your performance.

Every senior out there has lived through Elvis’ era or at least listened to his songs. Written as a track for the movie of the same name, “Jailhouse Rock” is a goofy song that describes the inmates in a prison.

The song was a chart-topper and even has been recognized by the Grammy Hall of Fame and several organizations. It’s a feel-good song with a bouncy vibe and comedic lyrics that would transport you to the days of rock and roll.

“Smoke Gets in Your Eyes” – The Platters

Originally written as a show tune for the 1933 musical Roberta, this romantic ballad is a smooth, good-vibe song accompanied by a slow, jazzy melody. The song goes pretty high at some parts, but as long as you’re enjoying yourself, you’re already smashing it.

“Shake, Rattle, and Roll” – Bill Haley and His Comets

If you’re looking for something to get your audience going, this song is perfect for that. Big Joe Turner actually sang the original version, but we feel Bill’s cover would suit most voices more.

With a bouncy melody and fun lyrics, this song will make you feel like you’re young again, dancing the night away in the club.

“I Walk the Line” – Johnny Cash

Another classic from Johnny Cash, “I Walk the Line” is his first number-one hit on the Billboard charts. The song is basically Johnny’s promise to be faithful to his first wife, Vivian. The song had such a strong influence on the music world that Bob Dylan even mentioned it in his memoir.

Definitely a good pick if you want to rekindle that old passion with your partner!

Anyone who goes to karaoke knows this classic song! Since its release in 1964, “L-O-V-E” has had a worldwide influence, leading to many covers in different languages and genres. Combining elements of jazz and swing, this song is pretty easy to sing, with its catchy melody and simple lyrics.

“Put Your Head on My Shoulder” – Paul Anka

A soulful pop ballad, “Put Your Head on My Shoulder” is one of Paul’s well-known smash hits, placing number two on the music charts. The song gushes with overflowing sappiness, describing the artist’s desire to be loved. It also has spawned many covers, the most recent being a mashup with Doja Cat’s “Streets” that eventually became a TikTok challenge.

“My Girl” – The Temptations

You probably heard this song being played at karaoke bars, weddings, and prom dances. Recorded in 1964, “My Girl” is the band’s signature hit and has even been selected for preservation for its significance. With its melodious rhythm and easy lyrics, you won’t be able to resist singing along once the beginning note starts.

“Close to You” – Carpenters

“Close to You” is a pop and soft-rock ballad made popular by the singing duo The Carpenters. It became such a breakthrough hit that it remains their iconic number until today. It’s an easy song to sing too, with its mellow melody and soft lyrics that’d remind you of simpler times.

Even if you’ve never been to West Virginia, you can always enjoy John Denver’s timeless number. The song is easy enough to follow along, and it’s a certified hit among the country crowd. With its relaxing guitar-backed melody, you’ll be taking a road trip through nostalgia.

“Don’t Sit Under the Apple Tree” – The Andrews Sisters

Any veteran would be familiar with this wartime favorite. Made popular during World War II, the song is about two lovers who promise to be loyal to each other while one of them goes to war. It’s an all-around sweet and optimistic number that makes you think of the good times.

A track from the famed Broadway musical The Sound of Music, “My Favorite Things” is an exciting song to sing to put your singing abilities to the test. Many versions have been inspired by this song, including Ariana Grande’s “7 Rings” in the modern era. The song is quite quirky and straightforward, so it’s more of a challenge to see if you can keep singing without getting tongue-tied.

The icon of love songs, “Unchained Melody” makes you remember your first dance, first date, or first kiss. An American classic, this song has been recorded in multiple languages by over 600 artists.

This romantic ballad demands you to sing it with tons of emotion. It’s a great song to dedicate to your first romances or the one you’re still with today.

“Walkin’ After Midnight” – Patsy Cline and the Jordanaires

“Walkin’ After Midnight” was Patsy’s first smash hit that became popular after she performed it on a television program in 1957. The song talks about a woman who feels lonely thinking about her lover as she’s walking outside. This country-pop single has a bouncy beat and distinctive quality that makes it easy yet fun to sing.

An all-time classic, “My Way” is one of Frank Sinatra’s well-known songs and has been covered by many performers, like Elvis Presley and the Sex Pistols. The song reaches into your soul with its wistful lyrics and simple instrumentals. Though you might not be able to match up to Frank’s vocals, you can make up for it by singing this song with all your heart. 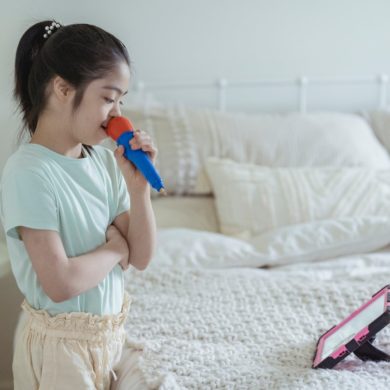