25 Best Montage Songs (For Spicing Up Your Video!)

When it comes to expressing yourself or celebrating a certain occasion, videos can be a good way of doing so. However, the videos must have the right music to set the correct tone and feel of the overall composition.

That’s why we’ll be going over a list of the 25 best montage songs you can use in your videos. Whether you’re looking to make your videos sentimental or upbeat, there’s certainly a track here that would get your message across.

Released in 2002, this fast-paced rock track is perfect for setting a nostalgic tone in your video montages.

The song even revolves on the theme of nostalgia and the bittersweet memories that accompany it.

With a catchy, bass-driven tune and wistful vocals, it has a reflective vibe that makes you think back of the good ol’ days.

“If You Wait” – London Grammar

“If You Wait” has a tender and sentimental feel to it, making it an appropriate fit for tribute montages.

Lyrically, it can be pretty vague, but it does seem to indicate that it’s about families who are separated.

The quiet melodies and haunting vocals make it work as a goodbye track or funeral dirge.

“Eye of the Tiger” – Survivor

The intro of this song is so iconic that you probably have heard it at some point or another.

With an uptempo rhythm, catchy instrumentals and powerful vocals, it makes a great hype track and would work for gym workout videos. Fittingly so since it was the theme song for the 1982 film Rocky III.

Okay, it’s cliche and outdated, but you can’t deny that this song is amazingly evergreen.

A romantic ballad, it finds the singer declaring his love for his partner and how much he wants to be with her.

The slow-paced tune and tender vocals make it work for weddings, anniversaries, or couple montage videos.

This upbeat track was inspired by the Greek myth of Orpheus and Eurydice.

Released in the band’s 2013 album Reflektor, the song centers around themes of hope, patience, love, and determination.

The song features funky electronic instrumentals that make it ideal for any kind of montage video.

If you’re looking for a catchy motivational montage track, this 2007 hip-hop number is perfect for you.

The song samples Daft Punk’s “Harder, Better, Faster, Stronger” single, which amplifies its core message of never giving up regardless of your mistakes.

This track is a solid choice for inspiring montage videos.

This uptempo electronic single went viral on TikTok in 2021. Since then, it has been played almost everywhere and used in many videos and edits.

The song features a slow buildup before a beat drop that leads to a high-energy rhythm and irresistible tune. Thus, it’s better for exciting montage videos like in gaming or movies.

Released in 2019, this hip-hop song is perfect for fast-paced and edgy montage videos.

It’s often used in gaming montage videos as it talks about shooting and its catchy beats line up nicely with any gunshot scenes.

This 2018 collaboration between Scott and Drake finds them rapping how they’re better than everyone else when they go into “sicko” mode.

It was a massive success upon release and topped music charts for weeks.

The song has smooth vocals and sharp bass beats that lend themselves well to cool or exciting montages.

“Through the Rain” – Mariah Carey

While Carey is well-known for her sweeping love ballads, she actually has several inspirational tracks, with this 2002 R&B song being one of them.

“Through the Rain” was based on Carey’s struggles at that time, and the lyrics serve to encourage others to stay strong.

With a simple, piano-backed melody, soft synths, and Carey’s gentle vocals, it’s a solid choice for graduation videos or videos dedicated to friends and family.

Sure, this song is overplayed, but does that make it a bad song? Of course not!

It’d make for a cheesy video montage but everyone will love it.

Though it was released in 2018, it only gained popularity a year later on TikTok.

Lyrically, it’s about Daniel’s sadness over his breakup and hopes that his next partner will be better.

With a catchy beat and emotional tune, it makes a great song choice for any kind of video montages, especially ones about heartbreak or relationships.

If you’re looking for a slower song, this 1999 country single has that exact vibe.

The song sees McGraw proclaiming his deep love for his partner and how she’s also his best friend who understands him.

The track oozes with sentimentality and emotion, making it suitable for wedding and anniversary videos.

“Heaven” is another beautiful song about love and friendship. Though it’s most known as the ending theme of the series How I Met Your Mother.

Published in the band’s 2012 titular album, this melancholic tune finds the singer pleading to his friend to not leave him.

The song features soft instrumentals and wistful vocals that would lend themselves well to sad montage videos, like when you’re saying goodbye to a loved one who’s moving away.

Written for the 1983 film National Lampoon’s Vacation, “Holiday Road” is one of those songs that would fit a road-trip-style montage.

Featuring an energetic rhythm, upbeat vibe, and lively vocals, this track would get you pumped and make your videos more interesting.

“Thotties” is one of those tracks that would add a cool and awesome feel to your videos.

With an irresistible beat, wicked synths, and catchy lyrics, it’s great for montages with lots of fast transitions.

Happy music makes people happy; that’s a fact. And this 2013 song will undeniably put a smile on anyone’s face.

The song radiates with a bright and positive message about enjoying life and just looking forward to your day.

“Good Riddance” was actually written following a breakup and was meant to be a diss toward the lead singer’s ex-girlfriend.

Despite its sarcastic message, it can also be interpreted as a song of accepting change and maturely moving on.

This track is apparently popular at high school proms and makes a great pick for graduation montages.

Though it was released in 2004, this song still slaps hard and would work nwell in any video montage, particularly dancing videos.

The upbeat tone and infectious tune would definitely add a whole new flavor to your videos.

This laidback 2012 track is based off the 1994 comedy film of the same name. It’s written from the perspective of the love interest of Forrest Gump, Jenny.

The song describes how Jenny still has feelings for Forrest Gump and promises not to forget him.

While the lyrics are quite melancholic, the track has a sweet melody and gentle vocals that make it ideal for slow-paced video montages.

A house-inspired pop track, “Get Lucky” is all about having a good time and connecting intimately with someone.

With an uptempo, funky beat, the song sets a lighthearted party-type vibe in your video montages. It’s also great for dance videos given its upbeat tone.

This track is well-known for being featured in the Disney film Meet the Robinsons in 2007.

The song was written in memory of Thomas’s dog that had passed away. Similarly, the song encourages us to cherish the time we have with our loved ones.

“Little Wonders” would be a good background track for heartwarming videos dedicated to family members and close friends.

“Go To Town” isn’t one of your introspective compositions, but it is a comical track which you can listen to for fun.

Featuring an infectious beat and dynamic vocals, it has an entertaining vibe that’s great for party videos.

“Stay the Night” – The Jacks

Published in 2021, “Stay the Night” has a comfy, laidback tone that can be used in your videos dedicated to your partners.

It’s a simple love ballad about falling for someone and wanting to spend time with them.

This song went absolutely viral on TikTok in 2019, and it’s easy to see why.

With a soulful melody, slinking beats, and smooth vocals, it’s a simplistic yet melodic track about wanting to get romantically involved with someone.

The upbeat structure of the track also makes it great for sick transitions in your video montages. 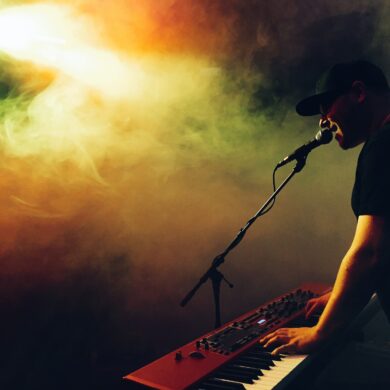 23 Songs About Dreams (For All The Dreamers)