Whether you’re a professional swimmer or only know the doggy paddle, there’s no doubt swimming can be a fun and relaxing activity.

It also connects us to the element of water, which is why it’s often mentioned in songs literally or metaphorically.

In this article, we’ll be highlighting 23 best songs about swimming and the different interpretations of each of them. From inspirational anthems to soulful ballads, this list will get you into the swim of things, and you might even find a favorite track!

The Best Songs about Swimming

This chill 2010 ballad is the epitome of the emotions you get when you’re swimming.

With a mellow vibe, the song describes the freedom and fun that comes with swimming. The singer also uses swimming as a metaphor for running away from his problems to go on an adventure.

The relaxing tune and soft vocals make it the perfect choice for beginners who aren’t ready for bigger songs yet.

“Into the Ocean” – Blue October

In this 2006 ballad, lead singer Justin Furstenfeld compares being lost in his own problems with struggling to swim in the ocean.

The song has a melancholic tone as it explores themes of depression and anxiety.

It’s a heavy and sentimental track that makes you rethink your life.

Featured in the band’s 1995 album Sparkle and Face, “Santa Monica” captures the feeling of wanting to run away from reality.

The song also finds frontman Art Alexakis singing about his girlfriend’s suicide when he was a teen, which led him to depression.

With an upbeat and energetic tune, this track expresses what we all have thought of at some point.

“My Friend Has a Swimming Pool” – Mausi

If you’re looking for a catchy track from this list, this 2014 song has got you covered.

Lyrically, it’s about having all the fun you want with your friends at a swimming pool.

The fast-paced tune and upbeat vocals make it perfect for your karaoke party or summer pool party!

Released in 2012, “Swimming Pools (Drank)” was the song that propelled Lamar to worldwide popularity.

The track uses the theme of swimming pools as a metaphor for drinking, alcoholism, and the peer pressure that accompanies it.

This song has been featured in various media like Grand Theft Auto V and Grey’s Anatomy.

Scottish indie-rock band Frightened Rabbit are well-known for their introspective tracks that could move hearts.

This 2010 song has a meaningful story as it’s about a man who decides to leave his troubled past for a better future by crossing the ocean.

The tender track is accompanied by an emotionally-charged tune that make it freeing to sing out.

Have you ever gotten bored of your current situation and wanted some exciting changes? Yeah, this song depicts that feeling perfectly.

A quirky love ballad, the track sees the protagonist asking his girlfriend to start over in new places to add some thrill into their boring lives.

With a laid-back melody and mellow vocals, it’s great for playing in your car when you’re on a trip.

This 1993 pop number takes swimming to whole new level, using it as a metaphor for a passionate escapade with a lover instead.

It’s a vividly descriptive song with the singer likening his lover to an ocean he can escape to.

The romantic tone and slow-paced vocals are absolutely relaxing, and would be a solid choice to sing to your loved one.

“Nightswimming” radiates with a sense of nostalgia as singer Micheal Stipe recounts his childhood.

The inspiration behind this song is largely debated about, but it can be interpreted as the loss of innocence when you grow up.

The melancholic rhythm and wistful vocals give it a sentimental feel that would remind you of days long past.

It’s surprising this track is obscure and underrated when it’s so dreamy in its own right.

Featured in the children’s film, Help! I’m a Fish!, the song is about having an adventure in the ocean.

With lulling instrumentals and quiet vocals, it’s a magical listen that depicts the experience of being in the blue unknown.

Frank Ocean has a knack for churning out introspective pop bangers, and this 2011 track makes a distinct mark as well.

The song explores a few heavy topics including suicide, guilt, and romantic baggage.

Despite its dark subject matter, it’s an emotional song that gets us deep in our feelings and encourages us to be reflective.

This upbeat pop single is a unique take on swimming, as it takes place from the perspective of an astronaut.

Lyrically, the song tells the story of an astronaut in space who’s able to see what the people on Earth are doing, including swimming in Miami.

Fueled by insomnia, this track was one of the band’s earlier works, which explains the abstract lyrics.

“Swim with Sam” – A Balladeer

This 2006 ballad might be a little hard to understand as it’s based off a Norwegian novel.

However, you can’t deny that the summery vibe, relaxing tune, and tender vocals give this song a calming quality you can’t get enough of.

“Swimming in the Flood” – Passion Pit

When you’re in a failing relationship, it can feel as though you’re struggling to swim in a relentless flood.

This melancholic synth-pop song is about heartbreak and anguish due to deceit and lies in a relationship.

If you’re reeling from a relationship that hurt you, this song is what you need for some healing.

Published in 2017, “Swim” explores the topics of personal baggage, relationships, and sexual desires.

With a synth-driven rhythm, this song sees the protagonist trying to get together with a girl despite the issues he’s facing in his life. He compares trying to pursue her to swimming in the sea.

Even if you can’t entirely relate to the lyrics, it has a nice vibe that would instantly make you feel relaxed.

“Swimming in the Stars” – Britney Spears

This song has a dreamy and positive feel that lets you escape to another world for a bit.

Released in 2016, the pop track was likely inspired by Spears’s interest in astrology. Lyrically, it’s about forgetting all your worries and taking in joy.

The lush tune and smooth vocals make it an uplifting song to sing and would cheer anyone up.

As the title goes, this catchy number has an easygoing and fleeting vibe that makes it perfect for your summer playlist.

The song also focuses on temporary crushes as it tells the story of a guy who’s hitting on a girl he meets at a swimming pool party.

This upbeat anthem will surely get you dancing and get everyone pumped for the night.

Swimming isn’t always related to struggle, summer fun, or escape. In this song, it’s used as a metaphor for hope, endurance, and perseverance.

This rock-infused track inspires us to keep staying strong through the hard times for better days are ahead.

The powerful tune and equally empowering message make it an uplifting song to belt out at karaoke.

This 1973 song is quite old, but it’s a fun and nostalgic listen that’s worth a shot.

It has a simple message: the joy of learning to swim. The simplicity of this song is what makes it charming and easy to sing.

The warm vibe of the track would also remind you of your childhood days.

The song follows Emmy as she’s cautious about falling in love but can’t stay away from a boy she likes. She asks him if she could spend time with him by his swimming pool.

It’s a relatable and beautiful song with its haunting vocals and lilting melodies.

“Jump in the Pool” – Friendly Fires

“Jump in the Pool” is another motivating track that inspires us to live life the way we desire.

The upbeat tone, energetic tune, and melodic harmonies would surely get everyone to sing along with you.

“Night Swimmers” is a fast-paced song, but it has a dreamy vibe that connects us strongly to the lyrics.

It’s a fairly simple track about taking a calm and pleasant swim in the night.

However, the catchy instrumentals, groovy rhythm, and emotional vocals make you feel as if you’re in another world.

This laidback 2017 song is what you need to listen to when you want to unwind after a stressful day.

With catchy beats and soft melodies, it’s about swimming through life and appreciating the little things. It’s a great song choice that helps us center our thoughts and take time to relax. 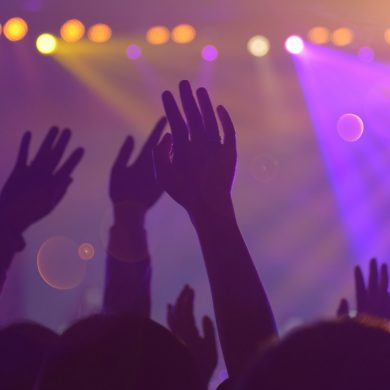