Back in the day, male singers with long hair were a pretty common sight. Whether it was their preferences or the trend at that time, we can’t deny that these singers had successful music careers along their long, untamed locks.

From popular rockers to classic crooners, we have rounded up a list of male singers who have worked their manes for the world to see and might serve as your next hair inspiration.

Steve Tyler was a big name in the 1970s as the lead singer of the blues-based rock band Aerosmith.

He’s known for his long, wavy hair with striking highlights and trademark scarves. Tyler is also known for the colorful outfits and makeup that he uses for his shows and shoots.

He still continues to record and perform music for Aerosmith despite being around with the band for more than 50 years. Guess that’s great news for Aerosmith fans out there!

Sporting different looks since his debut in the Jackson 5, there was no way we could leave out the legendary Michael Jackson.

Aside from being a prominent cultural figure and musical icon, Jackson was also well-known for his long natural curls.

Throughout his career, he didn’t stick to one hairstyle and has straightened and even kept his hair short.

If you’re looking for a messy yet stylish look, Kurt Cobain might be a good inspiration for you.

Cobain was the lead vocalist and songwriter for the 1980s punk-rock band Nirvana. With his anti-establishment persona and angsty songwriting, he was hailed as the voice of Generation X.

His unkempt blond locks were also part of his grungy image and literally launched the concept of the just-got-out-of-bed hairstyle.

Being one of the biggest reggae pioneers, Bob Marley is a singer that most people are familiar with.

Born in Jamaica, he was also known for his Rastafarian beliefs, which were reflected in his lifestyle and music.

Marley often wore his hair in dreadlocks, a hairstyle that remains synonymous with his image.

He wasn’t the first person to style his hair that way though as dreadlocks are worn by various ethnic groups around the world.

Though he was infamous for his hot temper and maniacal attitude, you can’t deny that he was a style icon of the ’80s.

With long, silky hair, he often showed it off with a bandana over his head, a look that became a trademark of his.

His hair wasn’t the only thing that was popular, Rose was also known for the “Axl Dance” where he dances in a snake-like fashion.

Aside from being a talented musician, the Purple Majesty has also slayed when it comes to the hair game.

Prince has rocked a number of styles with his signature natural curls, from bouncy afros to voluminous pompadours.

He also had a flamboyant and androgynous sense of style that suited his falsetto and extensive vocal range.

Born in 1947 in London, Dave Davies would go on to form the rock band The Kinks with his older brother, Ray.

His signature distorted power chord riffs on the electric guitar had a huge impact on the future heavy metal and punk-rock scene.

Throughout his career in The Kinks, he sported choppy black hair that went well with his rockstar persona.

Joe Cocker was a popular rock and blues singer in the 1940s.

His most notable work was a recording of the Beatles “With a Little Help from My Friends,” which was a massive success and launched him to stardom.

His unique, gritty voice and dynamic stage performances cemented him as a distinct artist in the musical scene. His messy long hair was also another trademark of his.

Brian May might not have been the main vocalist of the band Queen, but he’s just as legendary as Freddie Mercury and Roger Taylor.

During his time with Queen, he was regarded as a talented musician, creating a distinctive sound with his custom-built electric guitar Red Special.

May was also known for his stylish black curls throughout his younger days. Nowadays he still sports those curls but in white instead.

You might know him as the ex-husband of Katy Perry, but did you know he’s a singer too?

While most of his musical pieces are from movies, songs like “Fury Walls” and “The Clap” showcase his singing abilities and presence as a recording artist.

To match his energetic and creative persona, he keeps his long hair in a messy and textured style which he still has today.

Roger Daltrey was the co-founder and lead vocalist of the 1960s band The Who, considerably one of the most prominent rock bands in the 20th century.

Since the band’s breakup, Daltrey has released new singles and toured the country with the band No Plan B.

Daltrey experimented with different hairstyles in the past, but he always goes back to having loose and bouncy curls.

Raised in Colombia, Juanes is a musician dabbling in the hard rock and heavy metal genre. He used to be a member of the band Ekhymosis before going solo in the 2000s.

Juanes has gone through different hairstyles over the years as hair holds a spiritual meaning to him.

Whenever he decides to grow his hair out, he either lets his jet-black mane loose or ties it up in a ponytail.

Bob Dylan is an American folk singer and songwriter, with most of his celebrated works dating back to the 1960s.

He’s also an influential figure in pop culture, and his works have inspired many talented artists like Jimi Hendrix and Neil Young.

Dylan was well-known for his tousled curly hair that he kept untamed most of the time throughout his musical career.

Not a single person doesn’t know the legendary Bon Jovi, the lead singer of the band Bon Jovi.

Music wasn’t the only gig he did though. Bon Jovi has had an acting career, too, and even founded a football team based in Philadephia.

Bon Jovi was known to sport a long blond coif that could be described as a mix of an ’80s soft rock superstar and messy beach hair.

Keith Urban is a well-known country-rock artist and has worked with plenty of artists from different genres like Carrie Underwood and Dolly Parton.

He always wears his hair in a smooth and relaxed style that reflects the laidback and gritty vibes of his songs.

Urban even owns his own signature line of guitars and accessories since 2013.

Born to military parents, Khalifa decided to take a different path in life and became a rapper instead.

He usually wears his hair in messy dreadlocks, but he’s tied them up before and even tried having an afro before.

Khalifa’s love for marijuana is so open that he worked together with a weed company to create his own brand called the Khalifa Kush.

Jim Morrison was very popular in the 1960s as the lead singer for the rock band The Doors. He was also a poet, which was reflected in the lyrics of his songs.

Like his wild personality, Morrison rocked a tangled mess of natural black curls that hung above his shoulders.

After his unexpected death at 27, he remains an icon of rebelliousness and was known to wear leather pants that are now associated with typical rockstars.

Gerard Way is the lead singer and one of the founders of the punk band My Chemical Romance. The band was extremely popular in the 2000s.

Besides his musical career, Way has branched out into the comic book industry and created the acclaimed series The Umbrella Academy, which has been adapted into a Netflix series.

During his career with the band, he had long hair that went through a few dye jobs.

David Bowie is a leading name in the music industry, most notably for his glam-rock persona Ziggy Stardust.

Believe it or not, Bowie was such a huge fan of keeping long hair that he started the Society for the Prevention of Cruelty to Long-Haired Men.

His most iconic look is the mullet, which has inspired many other artists to adopt the stylish hairdo over the years. 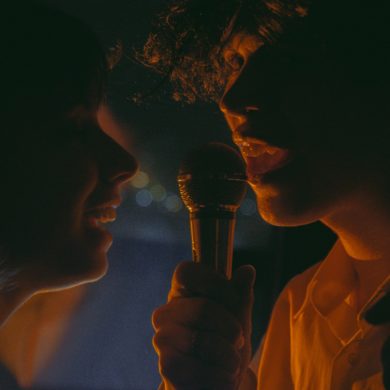