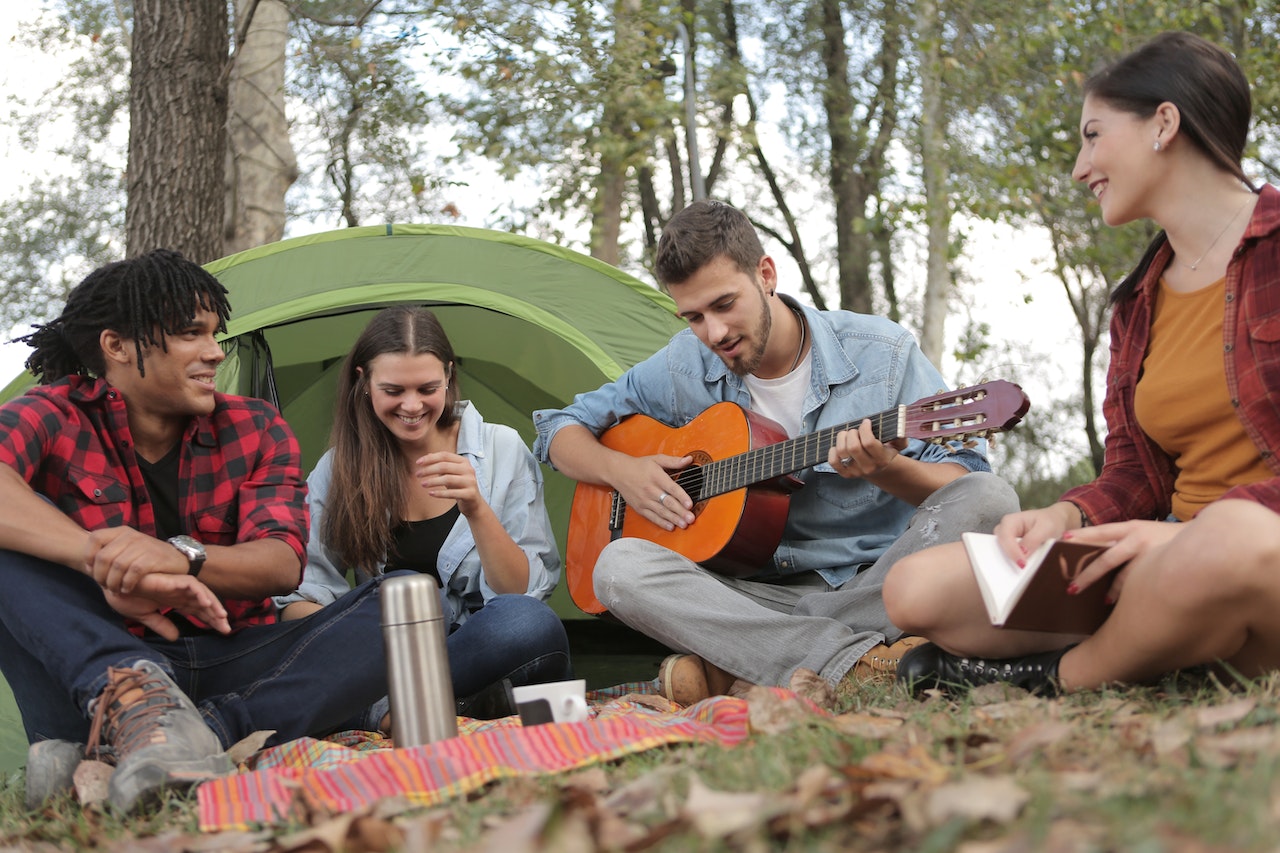 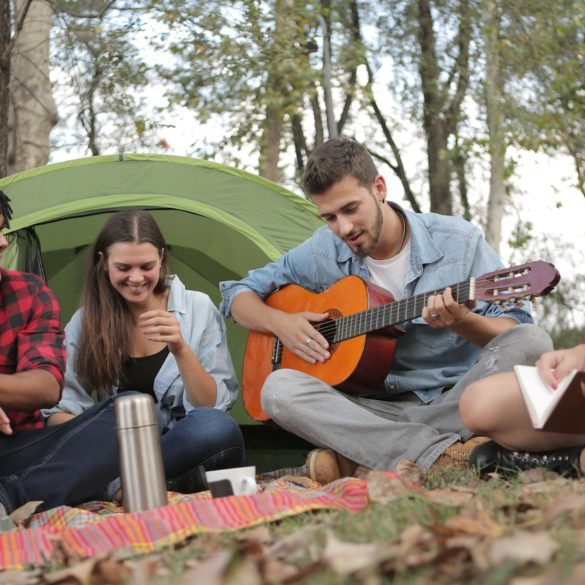 What’s more fun than going for karaoke with a bunch of friends? You get to sing together, laugh at each other, and take turns doing shots. While singing solo does have its own charm, there’s nothing like belting out a song as a group.

In group karaoke, any genre goes, and no one will blame you for making mistakes since everyone’s doing the same. That’s why we have rounded up a list of karaoke tracks you can sing with your friends. If you’re unsure which song to choose for group karaoke, take a pick from our list and have fun singing it with your buds!

The Best Karaoke Songs for Groups

“Everybody (Backstreet’s Back)” – Backstreet Boys

There’s nothing like starting a karaoke party with a Backstreet Boys hit single.

First released in 1997, this classic hasn’t lost its charm in karaoke and is still a great bop today.

With a contagious beat and simple lyrics, this song is so well-known that everyone knows how it goes.

This catchy track also has a part for everyone, making it a good choice for group karaoke.

This 1983 classic is a staple at any karaoke session given its iconic melody and powerful vocal harmonies.

It’s an emotional ballad that didn’t just top music charts worldwide but also spawned many covers by famous artists like Westlife and Yuridia.

This song is originally sung as a duet, so if you want to sing it as a group, you can choose the Glee or Westlife versions so everyone gets a verse.

If you and your friends are up for a vocal challenge, this 1975 rock number is what you’re looking for.

Considered one of the best songs of the century, “Bohemian Rhapsody” has an opera-induced melody and complex lyrics that seem to refer to the Faust legend and Freddie Mercury’s biography.

Be warned, this track has a high register and lots of key changes, so make sure everybody has warmed up before attempting this song.

Another classic from the 2000s, this catchy pop single was the introductory track of *NSYNC’s album No Strings Attached.

Arguably the band’s most popular track, “Bye Bye Bye” is about rejecting an annoying and unfaithful girlfriend.

With its recognizable lyrics and upbeat melody, you’ll definitely have tons of fun singing it with your friends.

No one can resist singing a Beyonce song on karaoke night. Released in 1999, “Say My Name” is the group’s signature song that skyrocketed them to popularity.

With an R&B-infused melody, this smash hit is about a girl confronting her cheating partner whereby she asks him to say her name to prove his love to her.

Being an iconic track, you’ll be reliving nostalgia with your friends and audience.

Written and performed by Scottish duo The Proclaimers, this 1988 rock ballad is about a man who proclaims how far he’s willing to travel to meet his love.

With simple instrumentals and heartfelt lyrics, this track is a good choice if you and your friends are into country music.

The song is moderate-paced, making it pretty easy to follow.

You can never have too much of this iconic 1988 rock single.

One of the most well-known songs of all time, you’ve probably heard this preppy track in films, TV shows, commercials, or games.

From its uplifting melody to its moving lyrics, “Don’t Stop Believin'” is the defining track that never says die.

If you want to make sure everyone gets a fair share of verses, go for Glee’s cover of this song, which is just as epic.

This 2001 track was such a huge hit that it ended up in the Oxford English Dictionary, bringing a new meaning to voluptuous woman.

Sampling Stevie Nick’s “Edge of Seventeen,” “Bootylicious” is a feminism-focused anthem on being comfortable in one’s skin.

Featuring a catchy beat and empowering lyrics, this song is great for an all-girls (or boys) dance too!

“Where Is the Love?” – Black Eyed Peas

Released in 2003 on the album Elephunk, “Where Is the Love?” is a fun blend of various music genres including hip-hop, R&B, and pop.

Though the song features an uptempo rhythm, it goes introspective with its lyrics, discussing issues like pollution, war, and racism while calling for everyone to show love to each other.

With different parts for everyone, this is a great track that you can sing with your friends.

Whether you love it or hate it, “Love Shack” is a classic and a karaoke staple that everyone can enjoy.

First released in 1989, this song is actually about a secluded place where lovers can meet to hook up.

The upbeat melody and silly lyrics give it a cheerful vibe, making it perfect for not just group karaoke but also to get everyone to join in!

Another entry from Black Eyed Peas, this 2011 single is one of their more mellow electropop songs.

With a combination of synths, heavy beats, and soft strings, “Just Can’t Get Enough” is a love ballad about being deeply infatuated with someone.

The song goes back and forth between singing and rapping, which would be fun to do with a group of friends during karaoke.

“What Makes You Beautiful” – One Direction

We remember a time when this 2011 track was so popular it was played almost everywhere.

“What Makes You Beautiful” is the debut single of boy band One Direction, detailing a boy giving his girlfriend a boost by proclaiming his love for her.

The song was a commercial success, peaking on music charts and even winning several awards.

With an irresistible melody and positively sweet lyrics, you and your friends will definitely feel uplifted when you take on this song!

Looking for a song that lightens everyone’s mood? Jackson 5’s “ABC” is sure to put a smile on anyone’s face.

Released in 1970, this cheerful track is about how easy it is to love someone.

This soul-infused single was such a hit that it even beat The Beatles on the music chart.

The bubbly melody and amazing vocals give it such a happy feel that you’ll feel refreshed after singing it with your friends.

Released in 1982, “It’s Raining Men” was a hit for the disco genre and a wonderful dance number that every generation knows.

Originally written by Paul Jaber and Paul Shaffer, the song had been shopped to other singers like Cher and Diana Ross until The Weather Girls took it.

With a lighthearted tune and frisky lyrics, you’re guaranteed to have tons of fun with this song.

Released as the theme song for the 2019 Charlie’s Angels film, this empowering anthem is about standing up to someone who tries to belittle you.

With amazing vocals and a light, pop-infused melody, the song is pretty easy to follow and fun to sing too.

Whether you’re a group of girls or guys, this preppy track will raise your confidence to another level.

Featuring three of music’s hottest women, “Bang Bang” is a pop smash hit about having fun at being bad girls.

This fast-paced song interchanges between singing and rapping, making it a solid choice if you have friends who want to take on Minaj’s fast-paced verses.

With powerful vocals and a catchy melody, this track will have adrenaline pumping as you try to follow its energetic rhythm.

This 1977 disco single is arguably one of the best Bee Gees songs, featuring an upbeat tune and meaningful lyrics.

“Stayin’ Alive” became so popular that it inspired many covers from various artists in different genres.

The best part about this song is that it’s well-known to every generation, so you’re guaranteed to get full-crowd participation if you sing it with your friends.

This is the greatest disco-pop song to ever exist, period.

Featured in the group’s 1976 album Arrival, “Dancing Queen” is the world’s first Europop disco hit that has withstood the test of time and remains a well-known classic today.

With an upbeat melody, dramatic chorus, and smooth lyrics, it’s easy to see why this track is a karaoke staple and an excellent dance number.

It might be hard to sing since it has a pretty high register, but it’s worth it to see your friends enjoy themselves.

This sweeping 2015 track explores forbidden love in a whole new way, describing a Romeo-and-Juliet situation where affections must be hidden behind closed doors.

The song was a huge hit after its release and became popular again in 2022 on TikTok.

With an emotional melody and an amazing mix of vocals, you and your friends will definitely sweep the audience off their feet when you sing this song. 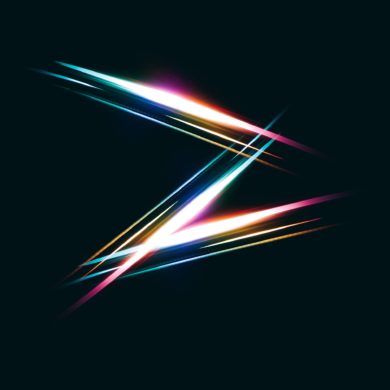