Since her debut in the 2000s, Lady Gaga is known as one of the most talented and entertaining artists of our time. She is a unique and versatile singer, reinventing her image and changing her musical styles from one album to another.

From pop to EDM, Lady Gaga has a diverse collection of amazing songs with equally significant messages and themes.

In this article, we’ll be taking a look at 23 of her tracks and their notable qualities that make them great for karaoke. We’re sure these songs will certainly bring a whole new experience to your karaoke parties.

Fresh off Gaga’s 2008 debut album The Fame, “Just Dance” was the track that catapulted her to stardom after topping international music charts.

A dance-pop number, this upbeat banger was all about partying, drinking, and dancing hard.

Like the lyrics, you won’t have to sing much to carry this song, it’s all about letting loose to the infectious beats and intense synths.

“Born This Way” is a straightforward, clear-cut single about empowerment, acceptance, and liberation.

With a combination of bass, synths, and catchy beats, this song is an advocate of self-confidence and self-love.

Aside from its positive message, the dramatic chorus also makes it incredibly freeing to belt out on stage.

This 2018 rock-infused composition is undeniably one of her best masterpieces.

While Cooper delivers a pleasant emotive performance, it’s Gaga’s powerful and sweeping vocals that make this ballad as splendid as it is.

While this award-winning track would definitely test your vocal range, it’s a beautiful song that’s certain to move the heart of anyone who hears it.

Like “Just Dance,” “Paparazzi” is another equally catchy song that we just can’t get enough of.

This uptempo track captures the struggles of being famous as it follows an obsessed fan stalking a celebrity.

With its straightforward lyrics and irresistible melody, you’ll surely have fun singing the “papa-paparazzi” part.

“The Edge of Glory”

Published in 2011, this bold and powerful number calls out to everyone to celebrate their life in glory.

The song was written in memory of Gaga’s grandfather, and the sentiment is amplified by its uplifting message and melodies.

It’s an amazing track that’d inspire and free you when you sing it with all your heart.

“Telephone” was originally written for Britney Spears, but she turned it down and Gaga decided to record it with Beyonce instead.

This fast-paced track represents Gaga’s fear of being suffocated by the media as she sings about dancing it out over answering her boyfriend’s phone calls.

It’s an exciting high-energy song that makes you wanna rock it out on the dance floor without a care in the world.

Applause was written when Gaga suffered from a hip injury and was forced to cancel her tour dates.

The lyrics represent her yearning for the cheering and love from her fans.

With a supercharged EDM-type melody, it’s a thrilling song that’d leave you breathless by the time it ends.

“Speechless” is Gaga’s take on parenthood since it was written after her father had surgery.

The song has a melancholic feel to it as she sings about her fear of death and being left behind by a precious “friend.”

A rock-influenced track, it’s a solid choice if you want something a little more relaxed.

Released in 2010, “Alejandro” musically takes inspiration from Swedish pop groups ABBA and Ace of Base.

With an irresistible tune, the song has been recognized as one of the catchiest tracks in the world.

So if you’re looking for a simple yet engaging song, “Alejandro” is your best option.

Co-produced with Zedd, GUY (which stands for “girl under you”) is an EDM track about dominance, submission, and gender roles.

It’s a fun song that you can sing without caring much for the lyrics and simply have a good time.

Gaga churned out many hits, and “Poker Face” is considerably her best-selling single of all time.

This synthpop banger sets a dark and sassy tone while exploring themes of sexuality.

“Poker Face” is such a recognizable song that you won’t have a problem getting everyone at your karaoke bar to sing along with you.

“Yoü and I” seems to be a breakup song as it draws inspiration from Gaga’s real-life partner at the time, Lüc Carl.

While it’s not as upbeat as her other tracks, it has an emotion-driven charm that gives it a lush and sincere vibe.

Perhaps the song’s best quality is its instrumentals as it samples Queen’s “We Will Rock You” and even features the band’s guitarist Brian May.

Released in 2009, this iconic electro-pop hit is the embodiment of the attraction to unhealthy relationships.

Straight away when the song opens with the “oh-oh-oh” line, you’re sucked into a bombastic experience of upbeat synths, bass, and melody.

This rave-inspired track will definitely get everyone hyped up for the night.

This sweet, quiet ballad was featured in the soundtrack for the 2018 film A Star Is Born.

The song revolves around Ally (the protagonist) singing about her late husband who’d died from suicide.

With a tender rhythm and straightforward lyrics, you’ll surely move plenty of hearts when you sing it before an audience.

“Marry the Night” is Gaga’s tribute to her home, New York City.

That said, it isn’t just about her love for the city; it’s also about her facing her insecurities and overcoming them, which we can relate to.

Like most of her songs, this track features synths, techno beats, and funky rock melodies to create a fast-paced number with her soprano vocals.

“Million Reasons” center around heartbreak and breakups as Gaga muses on the reasons she’s left behind by the men in her life.

Gaga has made much effort to promote this song in the past, performing it at various events such as at her 2016 Dive Bar Tour and 2017 Coachella Festival.

This straightforward yet catchy track was apparently written within four minutes after an encounter at a nightclub.

The lyrics of “Love Game” was full-on raunchy as it details Gaga’s attraction to someone she’d just met.

With an irresistible rhythm and upbeat tempo, it’s a great song choice if you’re feeling like pulling off a bold performance.

According to Gaga, “Perfect Illusion” had been written on an old typewriter, which might explain the raw, uninhibited emotion dripping from its lyrics.

The song is a criticism on modern social media and how people prefer to project a superficial version of themselves to others.

It’s a catchy track with an exciting bass and beat that takes you on a musical rollercoaster.

Gaga takes a step back from the fast-paced club anthems and dives into pop territory with this light-hearted track.

“Stupid Love” is a straightforward song about falling in love and wanting reciprocity from a love interest.

The upbeat melody and high-spirited lyrics of the song is enough to put a smile on anyone’s face.

Published in her 2013 album Artpop, “Gypsy” depicts Gaga’s loneliness and freedom that comes with her constant travels.

With an ’80s-inspired melody, this upbeat anthem sets a joyful and dramatic vibe that’d get anyone to join in along with you.

The lyrics can go pretty fast though, so make sure you practice first.

“Dance in the Dark”

This song has a dark and sophisticated vibe as it explores the physical insecurities of women and gender expectations in relationships.

A certified fan-favorite, “Dance in the Dark” is another fun and catchy song for Gaga fans to sing and dance to.

“Hair” is a form of self-expression, and Gaga captures that sentiment in this high-energy 2011 disco record.

Taking notes from metal bands Kiss and Iron Maiden, “Hair” talks about empowerment and self-liberation through the usage of hairstyles.

It’s certainly an inspiring song that encourages us to embrace ourselves and our hair.

“Just Another Day” is one of Gaga’s more carefree songs as the lyrics describe two friends going around New York city.

The song was written with producer Mark Ronson in mind and it reflects Gaga’s long-time friendship with him.

With a chirpy New York-style tune, this track is pretty manageable to sing and wouldn’t strain your vocals after one chorus. 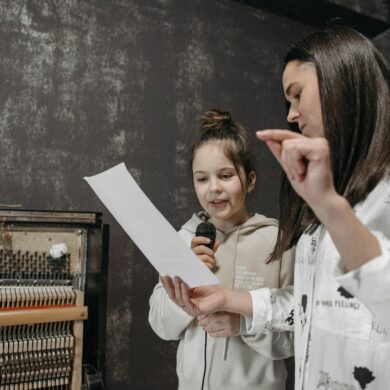 19 Songs About Nieces (Perfect For Dedications!)